Rabbi Mordechai Frum, the son-in-law of Rabbi Shalom Natan Raanan, was one of the prominent figures in the leadership of the yeshiva, after Rabbi Kook’s. He was originally one of the main students of the Novardok yeshiva in Tel Aviv and Bnei Brak and of the Chayei Olam yeshiva in Jerusalem and was also very close to Rabbi Yaakov Kanievsky, author of the “Kehilas Yaakov”.

Shortly before the War of Independence, Rabbi Frum attended the Mercaz Harav Yeshiva and became known as an outstanding Torah scholar in all areas of Torah. Besides his greatness in the Torah, he was also very involved I recentn events in Eretz Yisrael.In addition, he had a pleasant voice and served as Shaliach Tzibbur (cantor) in the prayers of the High Holy Days in the yeshiva. Everyone expected to see the continuation of his blossoming and growth toward becoming the finest in the yeshiva, but it did not come to fruition as he was taken in his youth, at age 42, on 28 Elul 5732.

Rabbi Mordechai Frum was born in 1930 in Piotrkow to Rabbi Naftali Hertz, one of the leaders of Gur chassidus and immigrated with his parents to Eretz Israel in 1935. He studied at the Novardok Yeshiva in Tel Aviv and Bnei Brak and at the Chayei Olam Yeshiva in Jerusalem.

Shortly before the War of Independence, he came to Yeshivat Mercaz Harav and became famous as a Torah scholar in all areas.
His first book, “Torat HaLevi,” on “Sefer HaChinuch” (the first eight mitzvot) testifies to hhis greatness, as does the enthusiastic approbations by the then Chief Rabbis, Rabbi Herzog and Rabbi Uziel, as well as by Rabbi Tzvi Pesach Frank and Rabbi Eliyahu Mordechai Vilkowski who was a member of the Chief Rabbinate of Israel and knew Rabbi Frum from his childhood.

In addition to his greatness in the Torah, he was very involved in events in the Land of Israel: Before the establishment of the State, while he was a yeshiva student, he served as the center of the “recruitment office” of Jerusalem. He was a close friend of David Raziel, commander of the Irgun, and later of David Bergman, a member of the Jerusalem municipality.

In addition, there were pleasant songs. His voice was heard by Tzipporah, the daughter of Rabbi Shalom Natan Raanan, sitting behind the window that remained open between the two halls (left open because of Rav Kook’s ruling that the openings of a synagogue should not be completely blocked) and he studied steadily, deeply and pleasantly. The voices of learning became the voices of bride and groom. He married the Rebbetzin Mrs. Tzipora Tichiyeh.

Five years after the war, Rabbi Tzvi Yehuda Kook appointed a Maggid for young Israeli high school graduates who attended the yeshiva. His students noted his meticulousness in the regularity of the shiurim and their conclusion at the predetermined time, “We always understood that our question stemmed from the fact that we did not go down to the depth of the literal text. In preparation for the holidays, Rabbi Frum lectured to his students about the holidays, using Aggadah and Mussar.

R ‘Aryeh Levin established, on motzai Yom Kippur, a special court headed by Rabbi Avraham Shapira, Rabbi Shabtai Shmueli and Rabbi Aryeh Levin himself with the unequivocal declaration, “We, the earthly court, decree that a person and a certain person be ordained with lasting seed, and just as the earthly court has decreed, so shall it be decided by the heavenly court.”

During the High Holy Days, he served as a shliach tzibbur in the evening prayers, and in the musaf prayers of the second day of Rosh Hashana. He composed the melody of the liturgical poem “Hayom Harat” which is sung in the yeshiva until today.

Everyone expected to see his greatness shine for the glory of the yeshiva, but we were unable to do so when he was taken in his 42nd year, on the 28th of Elul 5772, shortly after the death of Harav Nazir. 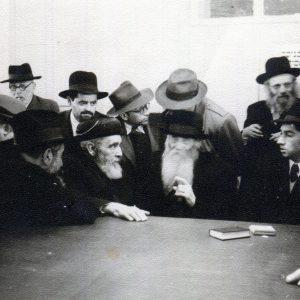